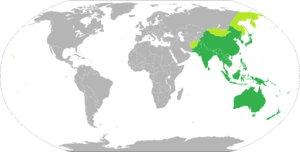 Asia-Pacific or Asia Pacific (abbreviated as Asia-Pac, AsPac, APAC, APJ, JAPA or JAPAC) is the part of the world in or near the Western Pacific Ocean. The region varies in size depending on which context, but it typically includes much of East Asia, South Asia, Southeast Asia, and Oceania.

The term may also include Russia (on the North Pacific) and countries in the Americas which are on the coast of the Eastern Pacific Ocean; the Asia-Pacific Economic Cooperation, for example, includes Canada, Chile, Russia, Mexico, Peru, and the United States.

Alternatively, the term sometimes comprises all of Asia and Australasia as well as small/medium/large Pacific island nations (Asia Pacific and Australasian Continent) - for example when dividing the world into large regions for commercial purposes (e.g. into Americas, EMEA and Asia Pacific).

On the whole there appears to be no clear cut definition of "Asia Pacific" and the regions included change as per the context.

Though imprecise, the term has become popular since the late 1980s in commerce, finance and politics. In fact, despite the heterogeneity of the regions' economies, most individual nations within the zone are emerging markets experiencing rapid growth. (Compare the concept/acronym APEJ or APeJ - Asia-Pacific excluding Japan.)

Situated between the Indian and Pacific Oceans, the group of over 25,000 islands is the largest archipelago by area, and fourth by number of islands in the world. It includes Brunei, East Malaysia, East Timor, Indonesia, Singapore, and the Philippines. The island of New Guinea is usually excluded from definitions of the Malay Archipelago, although the Indonesian western portion of the island may be included. The term is largely synonymous with maritime Southeast Asia.

The term was derived from the European concept of a Malay race, which referred to the people who inhabited what is now Brunei, East Timor, Indonesia (excluding Western New Guinea), Malaysia, Singapore, and the Philippines. The racial concept was proposed by European explorers based on their observations of the influence of the ethnic Malay empire, Srivijaya, which was based on the island of Sumatra, Indonesia.

The show is broadcast each weekday from the ABC Southbank Centre in Melbourne.